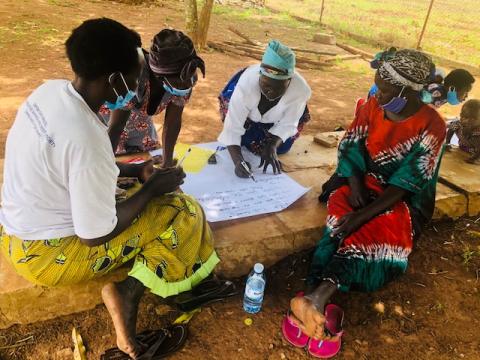 ACFODE engaged 93 district and sub county stakeholders in a district accountability day on 27th August 2015 in Oyam district. The event aimed at providing a platform where private and civil society actors would hold elected leaders accountable of their roles and responsibilities in community development. During the event, civil society and private sector actors from Ngai and Aleka sub-counties presented findings from their monitoring activities including challenges in the health and education sector. These civil society and private sector actors have been engaged by ACFODE in civic education sessions and their capacity was built to monitor service delivery in their respective sub-counties with focus on health and education sectors.

The challenges presented included; high rate of school dropout among girls, high level of absenteeism by teaches and pupils, child labour at school, inadequate supply and late delivery of drugs and limited space in outpatient department (particularly at Otwal health centre III). In Onekgwok Primary school, there are 15 teachers (12 males and 3 females) but the school has 2 permanent twin staff houses in place which can only accommodate 4 teachers. The remaining 11 teachers have grass thatch houses constructed by parents. At the time when community monitors visited the school, there was only one latrine for teachers and 10 mobile latrines for the pupils with a total population of 1,178 pupils (626 boys and 552 girls) and only 48 desks available for pupils. The school also has got 2 boreholes which are broken down and pupils walk 2.5 kilometers to look for clean water.

In his remarks, Hon. Bongo Debuni, district councilor from Loro Sub County blamed the Government of Uganda for poor school grades due to introduction of Universal Primary Education (UPE) which is apparently free education. He noted that UPE was more relevant for higher institutions of learning rather than primary schools. “UPE is making parents too lazy to pay school fees,” he added. It was also discovered during the activity that, follow up and implementation of district ordinances by leaders in Oyam is inefficient. “All primary schools should have changing rooms and pads for girls but it is not happening because the ordinance that specifies this is not followed up,” remarked Hon. Stella Anyango, female councilor from Oyam Town Council. “We need to be role models to the community members, if you are telling them to take their children to school, make sure that yours is in school too”, added Honorable Betty Owani, secretary education and Health.

The community monitors also registered achievements in the two sub-counties for example lobbying school management committees in Akuca primary school to impose a fine of 10,000/- on each parent whose child does not attend school and lobbying Ngai health center III to recruit more health workers. Community monitors however still face a challenge whereby some stakeholders within the health and education sectors are hesitant to share information regarding service delivery. However, with continuous support through sensitisation, community monitors believe that stakeholders will appreciate and embrace the initiative. The sub county and district stakeholders invited appreciated ACFODE for her initiative to provide such a forum where there is free interaction with community members and therefore expressed commitment to always support ACFODE whenever they are contacted. They requested that ACFODE should roll out the project to other sub-counties in Oyam. Community members also recommended that ACFODE considers economic empowerment of women in the district.