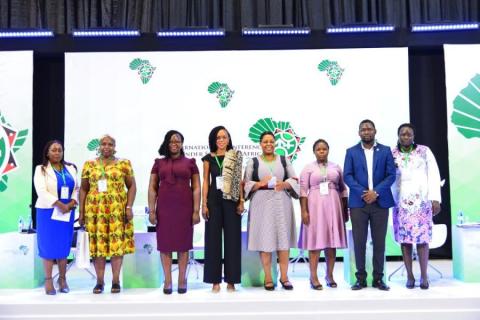 ACFODE runs women’s leadership and governance programme with the aim of increasing the transformative representation of women in political and decision-making positions. The programme targets both the active and potential women leaders at the district and sub-county levels to strategically position themselves for leadership in a multiparty dispensation in Uganda and to compete favourably with men to build leverage around their political demands. Interventions under this programme include; training and support for aspiring women’s leaders; experience sharing spaces, mentoring and coaching and support towards women’s caucuses.

To date over 60,000 aspiring and elected women leaders are equipped with skills and knowledge in leadership, good governance, gender equality, advocacy, communication, planning and budgeting, to ensure that women’s interests and concerns are fairly represented in decision making. Women have been elected as Members of Parliament, onto the District Executive Committees and as Heads of Committees and as a result, gender concerns have been brought to the fore at sub-county, district and national level.

ACFODE has supported the formation of 210 women’s networks and caucuses. This through facilitating them to hold planning and review meetings, hold community meetings and participate in media engagements on issues affecting women and communities. The caucuses have been instrumental in monitoring service delivery and influencing budget allocations especially on gender related concerns in their communities. The caucuses have played a key role in moving motions, passing ordinances and by-laws on the need to prioritize women’s needs in plans and budgets.  A number of ordinances and by-laws on Education, school feeding, public intoxication (alcoholism), criminalizing forced marriage, child marriage and domestic violence have been passed.

ACFODE has trained over 500 national and community-based organizations (CSOs) on gender-responsive laws, governance, and women’ rights. The organizations have in turn engaged with an estimated 100,000 rights holders and duty bearers on issues of gender, human rights, public service delivery, access to justice and economic well-being of women and men.

ACFODE spearheaded the creation of a network of civil society organizations promoting accountability and democratic governance called the GAIN Network. The Network has overgrown to a national organization with over 50 members from the four regions of the country.